We have been learning about forces in Science, exploring how forces act on objects and how moving air can make objects move.

We have started a project on the solar system. Keep an eye on this blog for more! Our project got us talking about gravity. We learned that gravity is a force that pulls us down towards the centre of the Earth.

We made parachutes using a tissue, four pieces of thread, a Lego brick and some sellotape. The air caught in the parachute and brought the crayon safely down to the ground! Well done to Naoise who made his own parachute at home with a plastic bag and a Lego man!!
We made our own hovercraft!!
We stuck a pop-top bottle cap to a CD. We then blew up a balloon and stretched the neck of the balloon over the lid. When we opened the lid, we noticed that the CD started to move about all on its own!! It is much easier to make it move when we give it a gentle push too!
When you open the cap, the balloon forces air out through the cap, creating a thin cushion of air beneath the CD. It moves quickly across the table because there is less friction. The CD is not rubbing against the table- it’s floating on air! Have a look at this video and see for yourselves!
We worked in teams to create these wonderful marble runs. We knew that gravity would pull the marble down to the ground, but we experimented with the paths that the marble was forced to make!
Our rocket experiment (which you can also about the 'Solar System' page) also taught us about forces. The air coming out of the back of the balloon pushed the balloon forward. This is how rockets work. The hot gases coming out of the back of the rocket pushes them upwards!
We made paper helicopters and paper planes.
We discussed how the spin of the rotor blades keeps helicopters up in the air like sycamore seeds, which we have often found outside our school. Click on the link below to see ‘helicopter seeds’ in action.

We made our own paper helicopters. Before we did, we talked about what would make a ‘good’ helicopter. Would it be the one that spun the most or the one that took the longest to fall to the ground?

Our paper planes flew so well that one of them accidentally flew out of the window.
Here are some of the templates we used. Why not try them out at home?!
We tested the Arrow, the Classic Dart and the Delta to see which one would travel the longest distance.
We used a trundle wheel to measure how many metres each had travelled.
The Arrow won! We recorded the results on a bar chart. 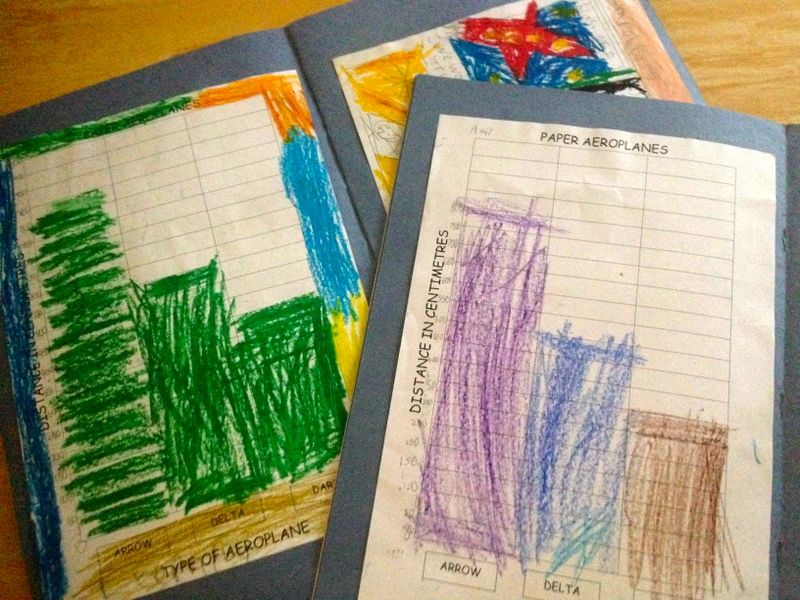 We talked about balancing points! We learned that all objects have a balancing point, called the centre of gravity. The lower you make the centre of gravity the more stable the object is. This is why a double decker bus should fill up the bottom deck first with passengers – if the bottom is heavier, the bus is less likely to topple over.
We made acrobatic clowns. We cut around the shape of a clown that was printed on card. We tried to balance the clown on the tip of our finger. He fell off! Then we added two pieces of play dough to his hands, he balanced. We discovered that the pieces had to be as equal in size as possible in order for this to work. 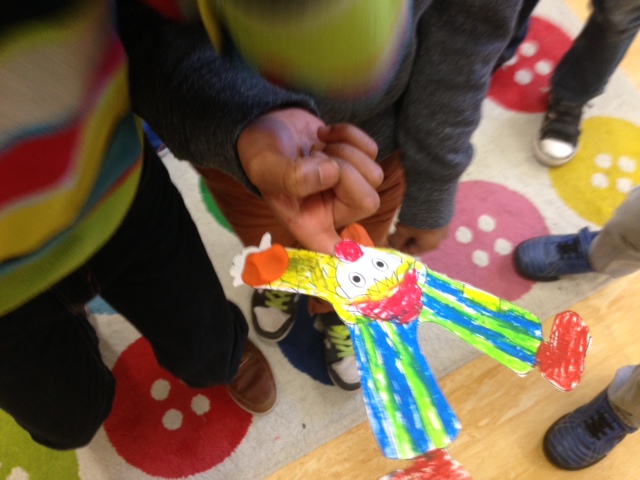 We tried taking one of the pieces off. It didn’t work anymore. We also tried putting them in different positions on the clown to see if this changed the result. Then we had some fun seeing if he could balance anywhere else on our bodies- like our noses or our feet!! Have a look!
Powered by